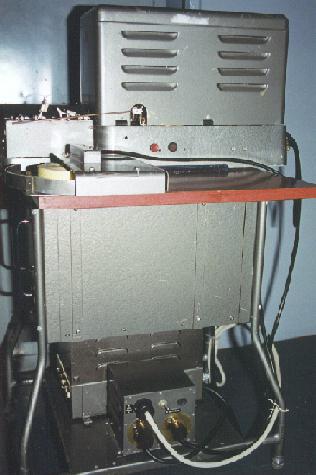 ROCKEX, a highly modified version of a Western Union on-line cipher machine, was introduced in 1943 and saw service in Canada  until 1975.  The message was prepared in a plain language tape and was fed through the transmitter heads simultaneously with a special scrambled tape to provide encoded transmittable text. At the receive terminal , the process was reversed. An "unscrambling " tape recreated a plain text copy. The Rockex was operated in conjunction with a tape punch and a keyboard/printer

The name Rockex originated after the designers attended a performance  of the Rockettes, a dance group featured at  New York's  Radio City Music Hall. This was a departure from the naming convention based on mythology.

Reference: Communications Security Establishment data and the display card from the Communications and Electronics Museum, Kingston  (C&E). The machine depicted in the photo is on display at the C & E Museum. (Photo by Jerry Proc)

Back to the [Museum Entrance]

Disclaimer: The opinions and views expressed in this document are those of the AFFSC Webmaster and participants alone. If you use any of the information in this document, it is at your own risk, we will not accept any responsibility for any damage or loss.