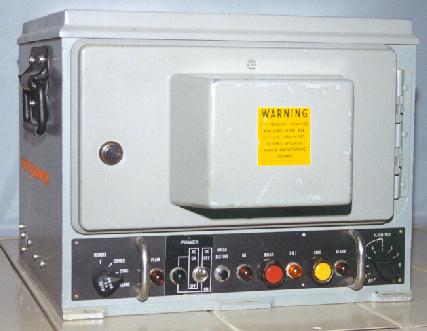 A crypto system known by the code name Orestes, employed a device called the KW-7. It was an on-line, send/receive crypto unit installed in shore stations and aboard ships . In one application, it was used for ship to shore and for intership radioteletype communications. To send messages over a secure UHF teletype circuit, a model 28 Teletype or reader (T-D) sent the prepared message to the KW-7 which in turn keyed a UHF transmitter in the AM mode. Note, that the KW-7 was not a totally synchronous unit, therefore, it required a phasing signal to be sent in order to attain a lock on the received signal.

The KW7 used either a punched card or plugboard for encryption. The plugboard had to be set up by hand and was not considered to be a fun job. The USN seemed to like the punched cards, while the U.S. Army had the plug boards. A punch card machine  could not communicate with a plug board machine!

The machine in the photo is on display at the Communications and Electronics Museum in Kingston Ontario. (Photo by Jerry Proc)

KW-7's were also used in U.S. military radio shelters like the TRC-136, the GRC-122 and the GRC-142. The GRC-142 or GRC-122 used one or two KW-7s in a simplex or full-duplex HF radio link  In either case they would have been attached to a GRC-106 radio set. Early shelter versions use Kleinschmidt teletypes  and later versions use UGC-74 teleprinters.

To my knowledge, the KW-7 is self-synchronizing to the extent that whenever the other fellow stops sending, you push a button which sends out an initialization sequence to the other end to put it in sync.

Thanks to Jerry Proc
(George's Comment: Another friend from my army days. Used one of these on our Lahr/Ismailia circuit. The only boards harder to key than the plug boards for the BID 610, because the heads were larger plastic bits with two pins on the end of the wires. There were three rows and a thin metal bar rolled down over each row to keep the set in place, and it was easiest to do the bottom row first and the top row last.)

Back to the [Museum Entrance]

Disclaimer: The opinions and views expressed in this document are those of the AFFSC Webmaster and participants alone. If you use any of the information in this document, it is at your own risk, we will not accept any responsibility for any damage or loss.