Introduction
This section introduces the concept of data codes. This refers to the way in which bits are grouped together to represent different symbols. There are a number of different codes, but the most common code in use today is the ASCII code.

DATA CODES
This refers to the way in which data is represented. The sender and receiver must use the same code in order to communicate properly. Here, we will briefly look at two common codes, one which was developed earlier on and was widely used in early telegraph systems, and the other, which is in widespread use today.

International Telegraph Codes
The Baudot code was used extensively in early (pre-1900) telegraph systems. It is a five bit code invented by the Frenchman Emile Baudot in 1870. Using five bits allowed 32 different characters. To accommodate all the letters of the alphabet and numerals, two of the 32 combinations were used to select alternate character sets (known as lowercase or alpha characters, and uppercase or numbers, punctuation and special symbols).


Each character is preceded by a start bit, and followed by a stop bit. It is an asynchronous code, and thus suited for low speed data communication.

The Foreign Service Communicator was most familiar with the use of the Murray Code on the perforated paper tape that was prepared with message traffic. While some later models of teletype equipment ("reperforators" or "reperfs") printed the characters on the paper tape, Communicators were capable of "reading" an unprinted plain tape and aligning it on the "TD" head ("Transmitter Distributor"). Whoops, slipping into jargon, there. 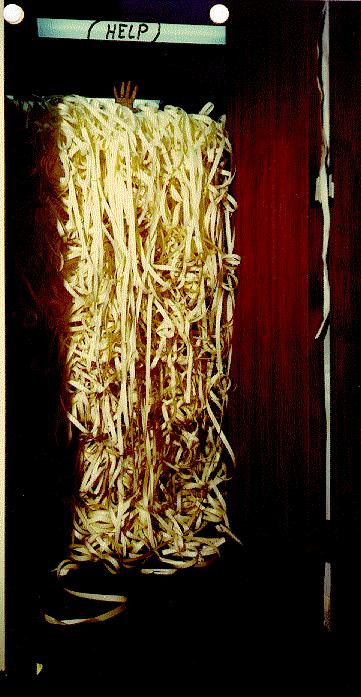 ASCII (American Standard Code for Information Interchange)
The ASCII code is the most popular code for serial data communications today. It is a seven bit code (128 combinations), and thus supports upper and lowercase characters, numeric digits, punctuation symbols, and special codes. The table below lists the values for each character in the ASCII set.


To work out a particular value from the table, you first determine the row value, then add the column value. For example, the character A has a value of 41, being a row value of 40 and a column value of 1.

ASCII is also used as the data code for keyboards in computers. Control Codes have values between 00 and 1F (hexadecimal). Control codes are used in binary synchronous communication, and device control codes in communicating with devices such as printers or terminals.

Disclaimer: The opinions and views expressed in this document are those of the AFFSC webmaster and participants alone. If you use any of the information in this document, it is at your own risk, we will not accept any responsibility for any damage or loss.